Running season is already started in the southern hemisphere and as I go out running for my own training almost every day per week I see more people outside running. That is the spirit I like to see in where I live. On the flip side, I rarely bump into someone with a correct cadence – number of strides per minute – which is to my understanding is the best way to tell if a runner is running efficiently or not. Referring to my previous post about cadence of 180 strides per minute , based on a research done in 1960’s the best way of incorporating elasticity of tendons into running starts with a cadence from around 180 strides per minute. If you are slower than that you might want to talk to me.

At this post am going to talk about a dear client of mine, Mel, who signed up for training with me in Sep 2016 and has been at various training sessions with me since then. Am going to explain what issues she had in the past and how I could help her.

When she approached me for the first time, she had been advised by her physio to stop running due to an injury felt in the knee. She found it a good time to check her running technique wondering what in it could have caused the issue. That was a wise move because correcting running technique is best to be done at either off-season, downtime like this injury that only prevents hard workout, or when there is no big goal in the horizon. Here are some snapshots from that day when I took a video for the form analysis. I go through one by one and explain how I analysed each. 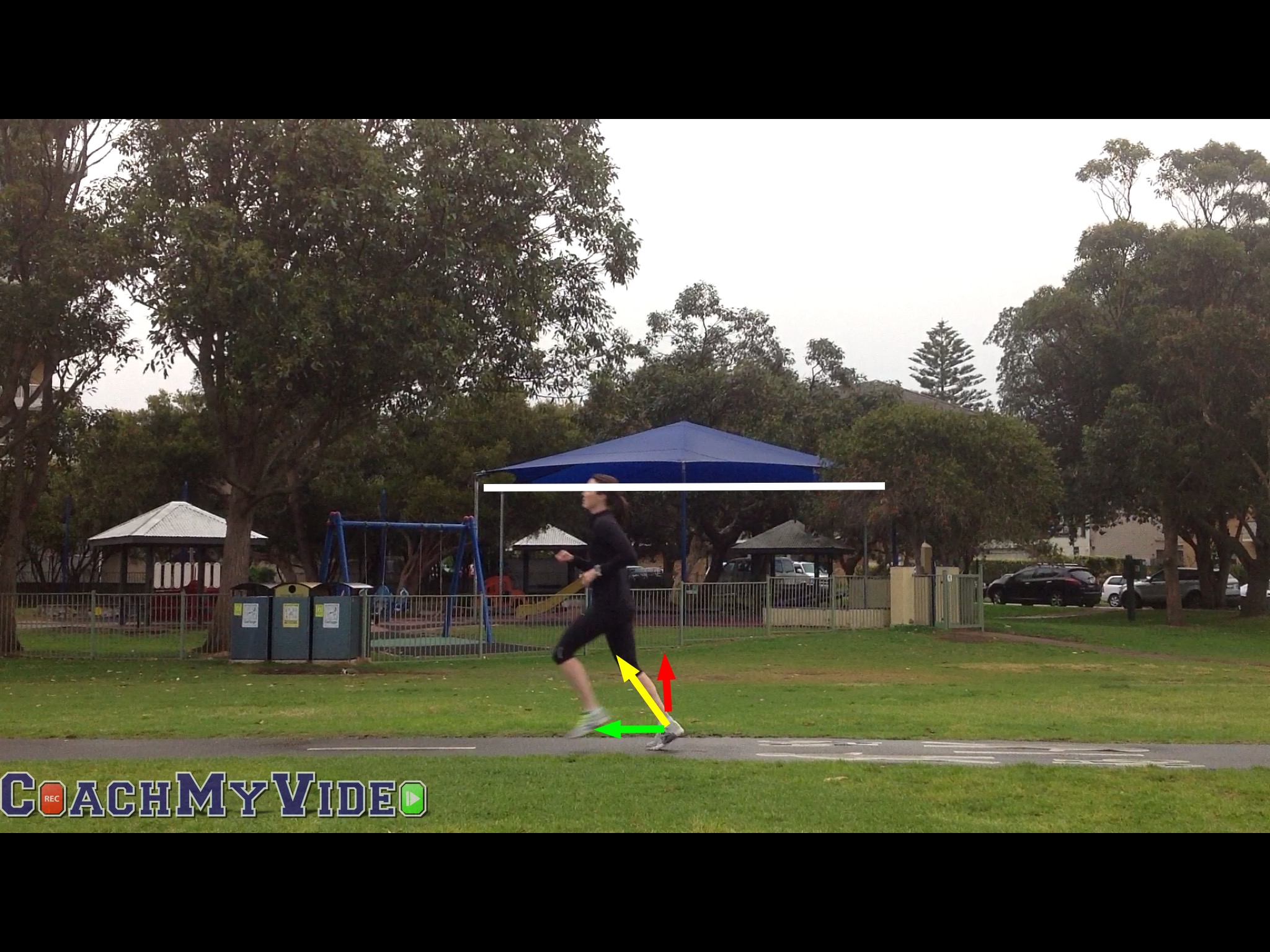 At this shot you can see “toe-push off” a very common technique by most of recreational runners. Runners push the ground backwards using lower legs aiming for propulsion from the ground reaction force. What they end up in is a horizontal component which is expected, plus an extra vertical component which does not work in their favour somehow. It throws the runner upwards so that the runner spends longer time airborne for an extended time to increase the stride length to cover more ground. All sounds useful on paper but causes trouble in practice. First one is creation of this vertical component is waste of energy because it is not in the forward direction of running. Roughly calculating the negative impact of it, at running over a course of a full marathon (42km) this results in an extra vertical oscillation that is equal to climbing up a couple of kilometers. The two lines highlight vertical oscillation in the following image. 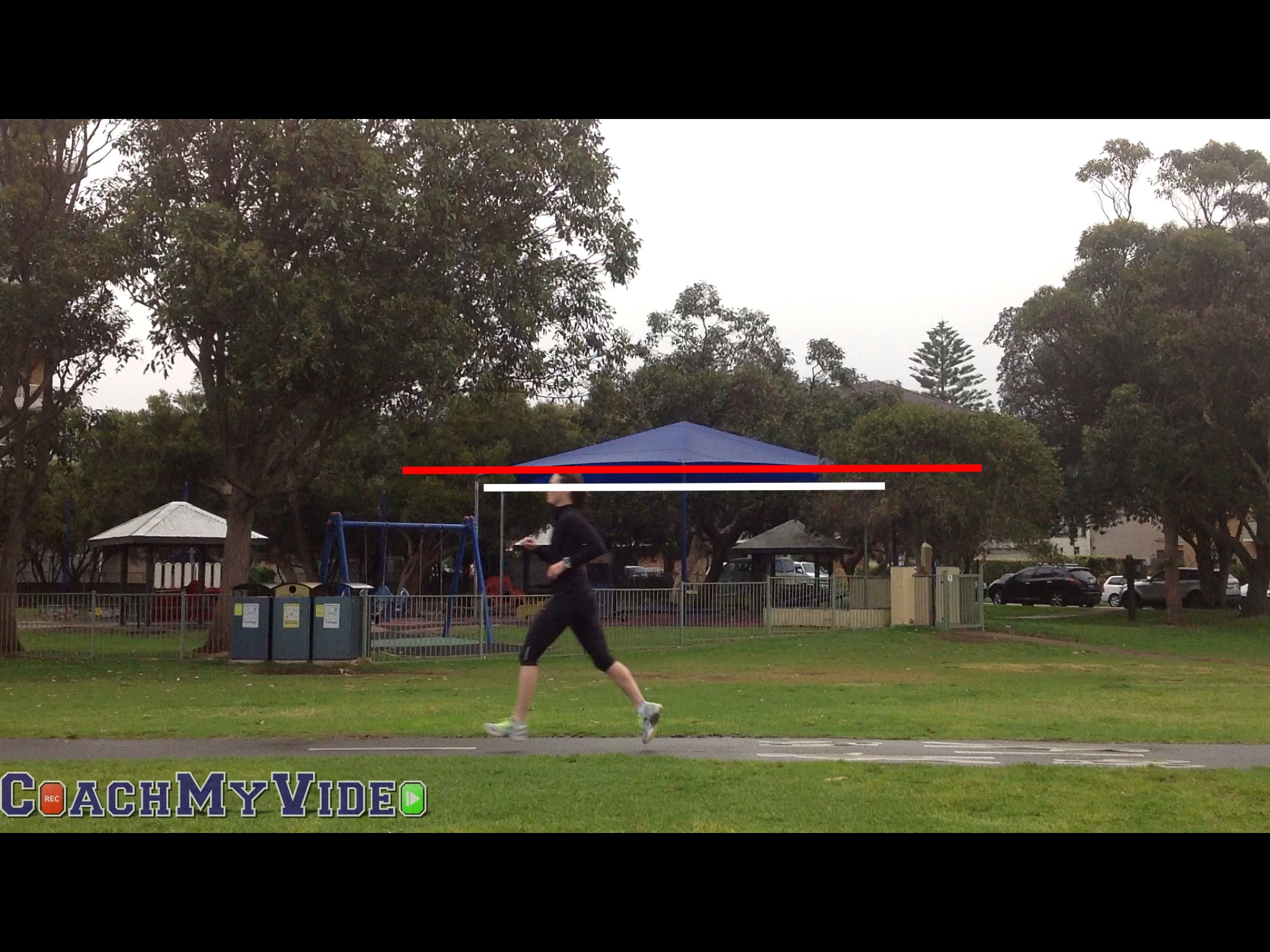 Pushing off the ground usually increases the average stride length (same distance would be done in less number of strides). That means the runner’s cadence would drop below 180 strides per minute so that the elasticity of tendons would not be used at maximum capacity. Mel’s cadence was below 180 by 10-20 strides per minute before she switched to running in Pose. She was aware of it and wondered how to fix it.

One more issue that usually comes with over-striding is rear foot landing. Landing on heels although is natural and legit in some style of running, is not an efficient technique for running long distances. 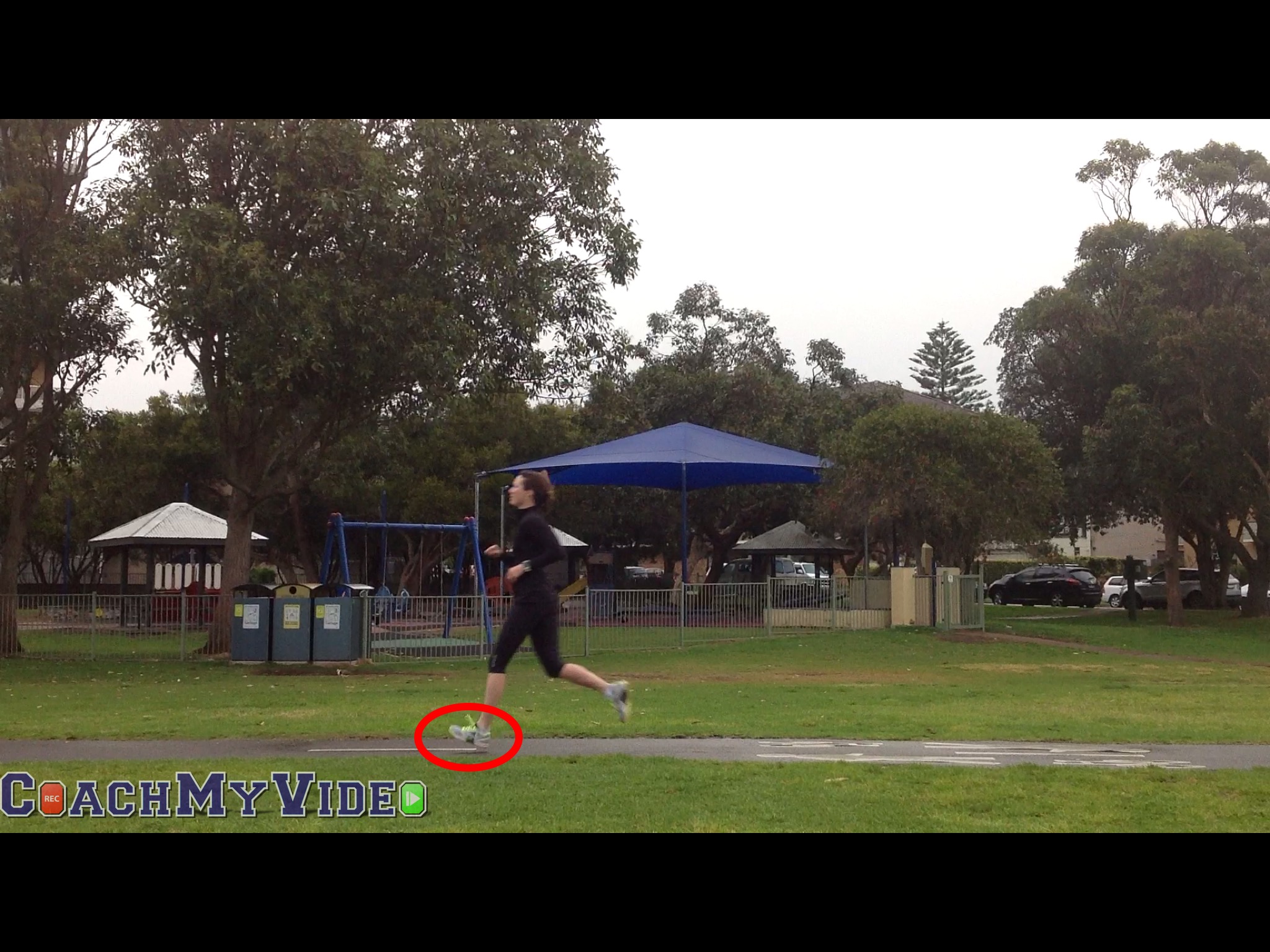 Main reason for it not being efficient is it does not utilise elasticity of tendons in the ankle joint for a proper bounce off the ground. In front foot landing ankle joint is engaged so that not only Achilles tendon participates in absorbing the shock it can also preserve some energy to release later (bouncing off Achilles tendon). There are experts that might argue this, perhaps warning likelihood of Achilles tendinopathy. My counter argument is that the reason some runners get injured from doing this is they “push off” the ground (using calf muscle that is linked to Achilles tendon) right after “absorbing shock” (again using calf muscle and Achilles tendon). Two jobs performed in a row at every single stride. That is too much. If they allow their Achilles tendon to rest after landing, their risk of injury decreases massively. They will see it more tangibly when they feel less sore in their calf muscles from running in Pose that engulfs all these correct practices.

After a few sessions of training and Mel’s running in her own time gradually building up while practicing this technique, I took a video at one of our sessions a few months later and here am sharing the result. It was early morning hence lack of light affected the quality of the images however the points can still be seen in the blurry snapshots.

One major improvement in Mel’s running form is she now lands under her hips. In pose running the runner is meant to relax his or her landing foot, letting it land on its own as opposed to active landing. Active landing means that the runner aims for or enforces a particular way of landing, either front foot or rear foot. 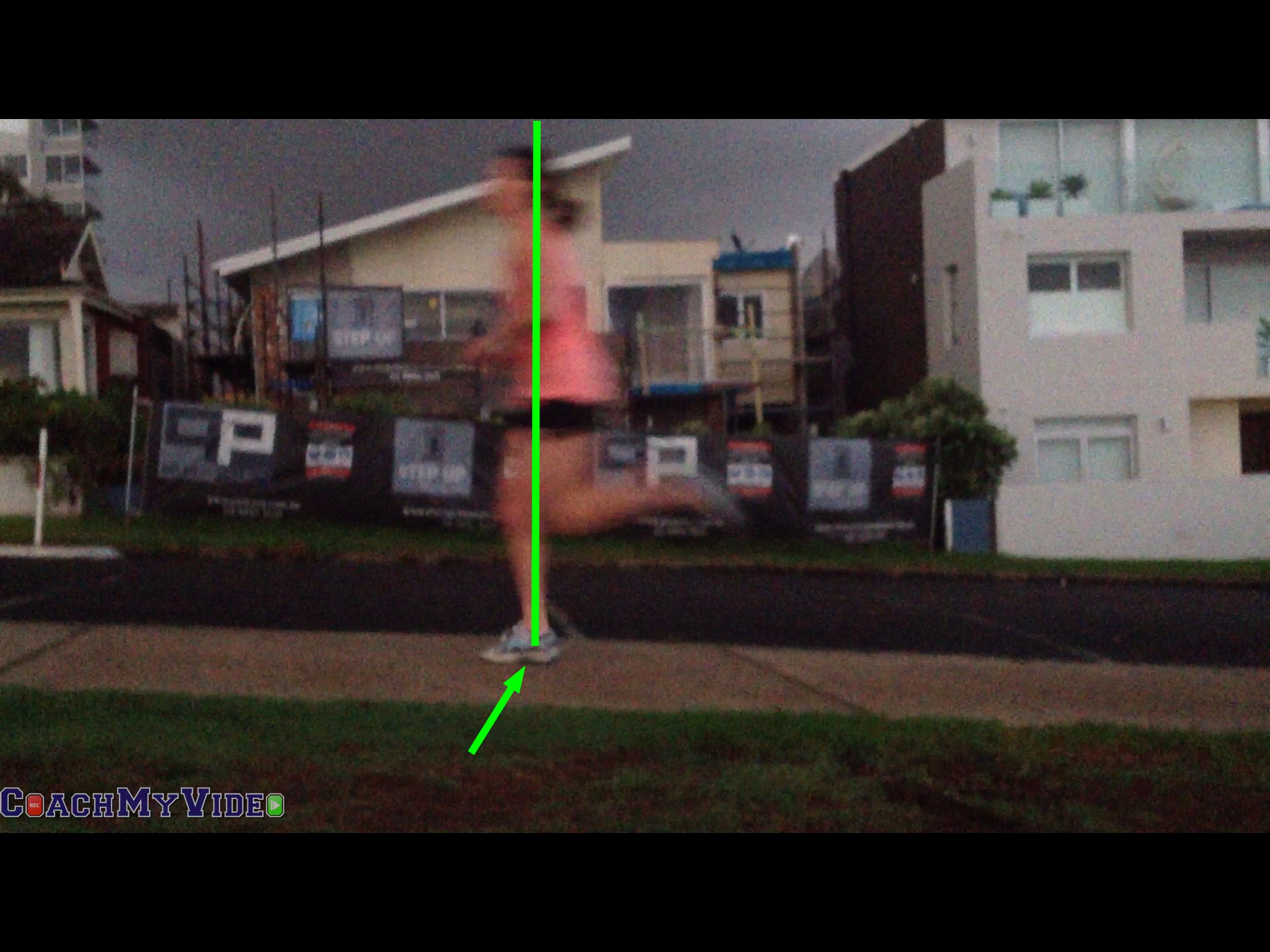 The other improvement was she pretty much rectified her late pull. Late pull as fully explained in a previous post of mine is the case in which the foot on the standing leg is not removed off the ground in time after the moment the moving foot passes the standing knee. If too confusing, in simple words it means when frame by frame reviewing a sample video of somebody’s running, in the frame after the one in which the moving foot is next to the standing knee the back foot is expected to be completely lifted off the ground. In Mel’s case it is pretty close to perfection at the following snapshot. 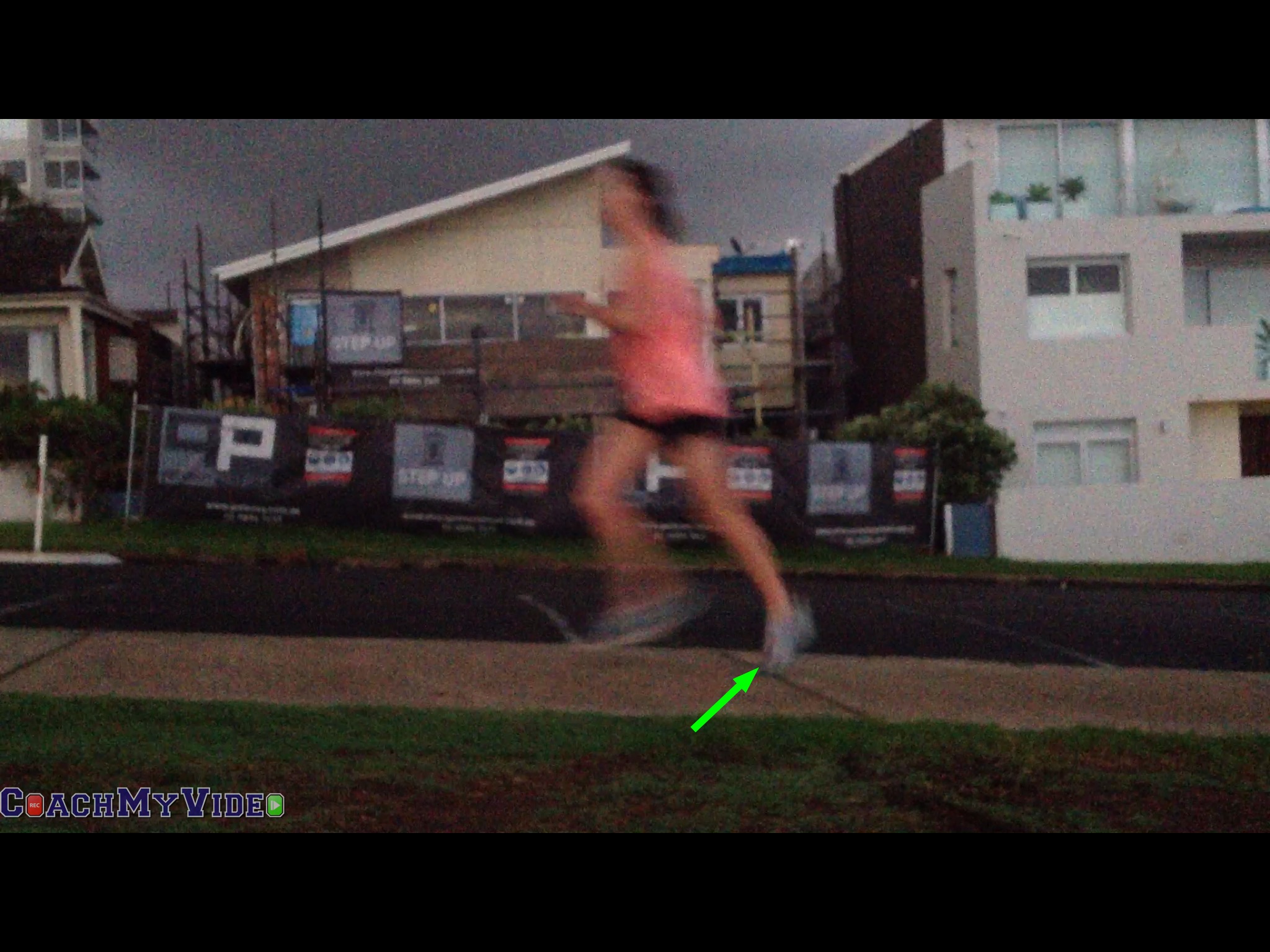 Last improvement was her cadence reached 180 spm. One immediate outcome of increasing cadence that is tangible to runners is how short the strides become. Agility and the skill to be agile play important role in adjusting cadence into the right range.

By making these subtle changes Mel managed to run pain free while increasing her max distance and her pace too. Her words:

“By seeing you I have definitely learnt about running methodology and why it’s important and whilst I am currently injured, I did manage to go a long time without any injuries since starting with you and was able to considerably increase the distances I could run pain free (managed to get up to 22kms). I was also able to increase my running speed doing a PB of 24:19 over 5km.”

Pose method of running is what everyone should learn before jumping into training straight away. Techniques at running although are not too complicated compared to those of the other sports like tennis or soccer, they still play an important role and should not be neglected. Running is totally a repetitive activity so that one small improvement scales up to a massive advantage. Running a full marathon race in 4 hours takes more than 38000 strides for an average runner at that level, not mentioning the total distance/strides run at the training for the race. Now one can picture better how much a small form correction cascades and blossoms to benefit the runner.