Be merciful to your Achilles tendon

Am sure most of the audience of this website know where Achilles tendon is located in our body but in case some do not it is right in the back of your shin, connected to the heel bone (calcaneus). In general, the duty of tendons is to connect muscles to bones. That means they are located around joints and transfer forces from muscles to bones. Being around joints have made them elastic – through evolution – to allow a little room for smoother movement of joints. You can simply experience this elasticity. Just start jumping up and down on the spot, the first jump-up might feel slightly harder than the following ones that benefit from a little bounce off the ground from the landing of the previous jump. Tendons preserves energy when going under load and release a portion of it when unloading. This means elasticity of tendons. 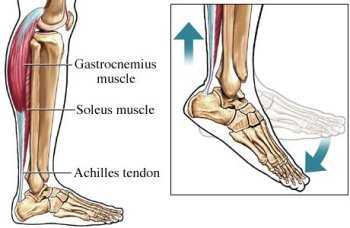 Achilles tendon is the thickest one in human body. There are a couple of muscles that their tendons merge into Achilles tendon. The largest muscle linked to it is the calf muscle, known as gastrocnemius. This muscle does plantar flexion, meaning it pushes toes away from shins. This action is helpful at landing on the front foot where this muscle participates in absorbing the landing shock. While eccentrically getting loaded with the landing shock, Achilles tendon preserves a portion of energy (depending how elastic it is in every individual) to release it later when the load is getting removed (from fall to pull phase of pose running). That is the so-called bounced off the Achilles tendon you might have heard on the topic of efficient running techniques. 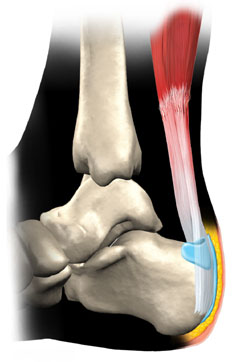 One common mistake by recreational runners is they actively push off the ground with their lower legs, mainly implying the usage of calf muscles as a source of propulsion. Push off the ground is not limited to calf muscles though, knee push off is another common technique which is not really a good practice. Up to the running phase that this calf push off (aka toe push off) is happening, this muscle has worked against the runner’s movement (landing on the ground) to stop the motion. It is fully loaded eccentrically. Let’s freeze the moment right here. As far as I see there are two options for the runner:

The first option is known as an incorrect practice in Pose method because of excessive pressure on a just-fully-loaded muscle. Doing so is known as the cause of Achilles tendinitis.
The second option is what recommended by Pose method, because using calf muscles for propulsion is like spending petty cash on a big project. Calves are for shorter, quicker and more agile movements rather than being dominantly used as a source of propulsion.
In Pose method of running, the source of propulsion, or in simpler word speed, is gravity. Gravity is free! As we lean forward, we tend to fall and the speed from that fall exponentially increases by the angle of fall so that we cannot properly catch ourselves at running if it exceeds 22.5 degrees. Switching running technique to use gravity as opposed to pushing off the ground with ankle or knee joint takes doing a few drills and lots of practice. The outcome of this switch, which is what I tell my clients, is to push an invisible roof above their heads that resembles injury. That roof has to be pushed way higher so the sky will be your limit. Remove the excessive pressure from your Achilles tendon and the entire lower leg by lifting off your feet as opposed to pushing off the ground. Very subtle change, results in a huge difference.

Are you taxing your lower legs too much at running?

Getting subconscious mind under control