My Take on Minimalist Running

My first experience with minimalist running shoes goes back to 2011. I can tell it was one of my biggest discovery at running. I slowly transitioned into a pair of Vibram Five Fingers (TreckSport was the model to be accurate) and then increased intensity and distance as I progressed. I ran two full marathons in them in 2012, fastest at 3:11, and achieved the PB of 56:58 in City2Surf.

Despite ticking all the goals at high mark, the glory did not last long as I faced a benign Achilles tendinitis. I looked into the cause of that and found Pose Method of Running explaining it the best.

I certainly over-trained during that period but in addition to that the issue with my running form/technique was I used to push off the ground, mainly toe push off. I also had a wrong understanding of utilization of natural shock absorption in the legs which led me to forcibly stay on the balls of my feet holding my heels high all the time. I forced myself to hurt my right Achilles tendon, simply because of lack of knowledge.

What I gained during that glorious period was strong, lean and muscly lower legs. Interesting that recently bumped into this article as a proof to this experience of my own: www.shape.com/fitness/gear/should-you-wear-minimalist-running-shoes in which reads:

In a study conducted by Hong Kong Polytechnic University in conjunction with Harvard Medical School, researchers found that training in MRS (Minimalist Running Shoes) increased runner’s muscle mass and strength in the feet and lower legs…

I still run in VFF and recommend them to everyone however if you are not running in pose you might get yourself injured if you train too seriously in them. I always tell everyone, once you learn how to run efficiently you will realize how less important shoes are.

Coming at a different angle on this subject, we were looking for a new pair of shoes for my 4.5 yo son a few months ago, for sports other than running like soccer, and I could not choose anything better than Nike Revolution and then Nike Free, although was not totally happy with either due to their slight heel elevation (they are NOT zero-drop). All shoes at the shops we went to had lots of support in them which would not be approved by me the barefoot-running evangelist daddy especially when it comes to kids. Bad news is last week I took a video of his running form and was shocked when saw his over-striding, landing ahead of body and heel-striking! All the three devils were at the party! 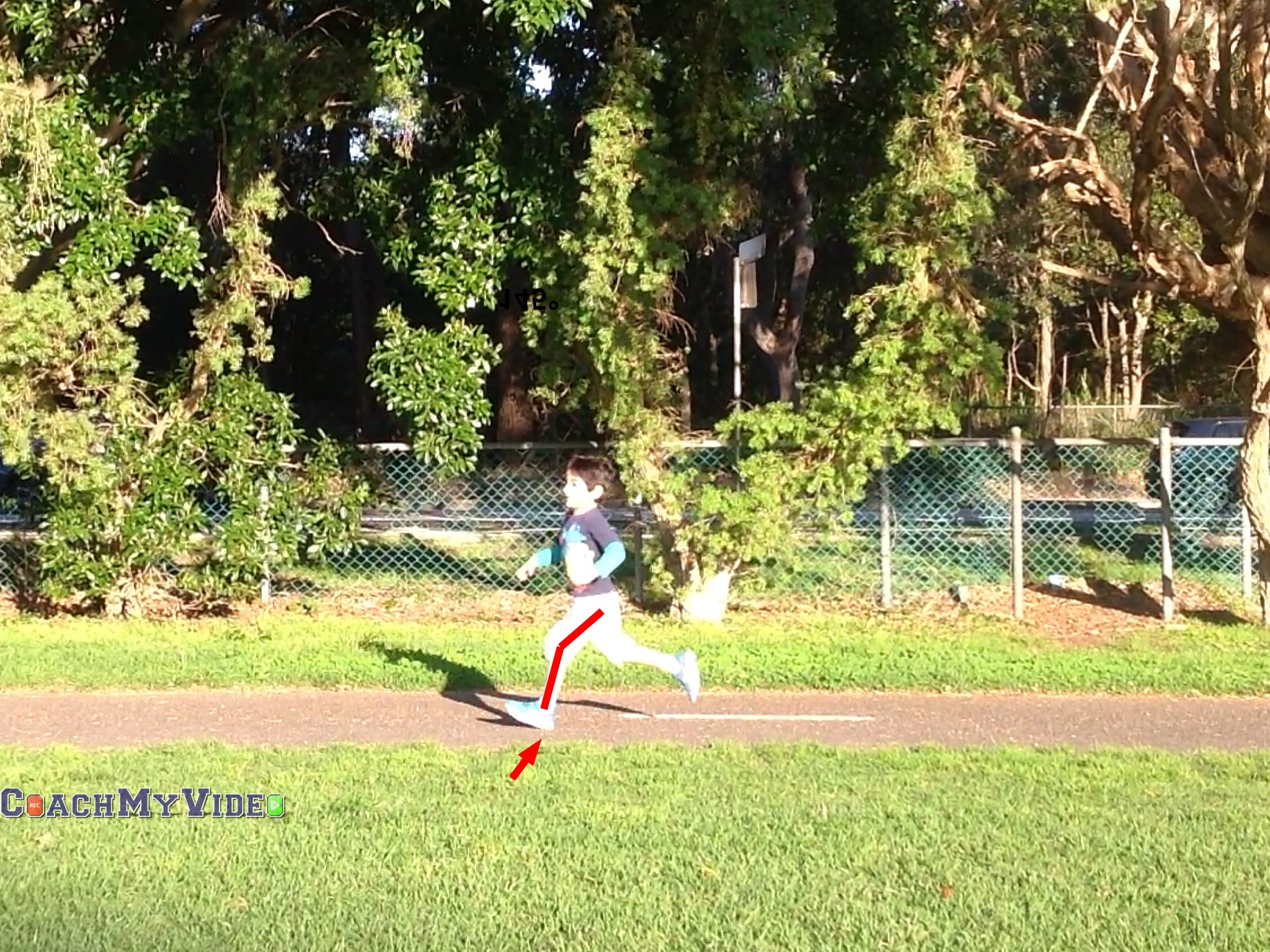 I asked him to take his shoes off and run again. That came with another shocking moment that the evils were still there. 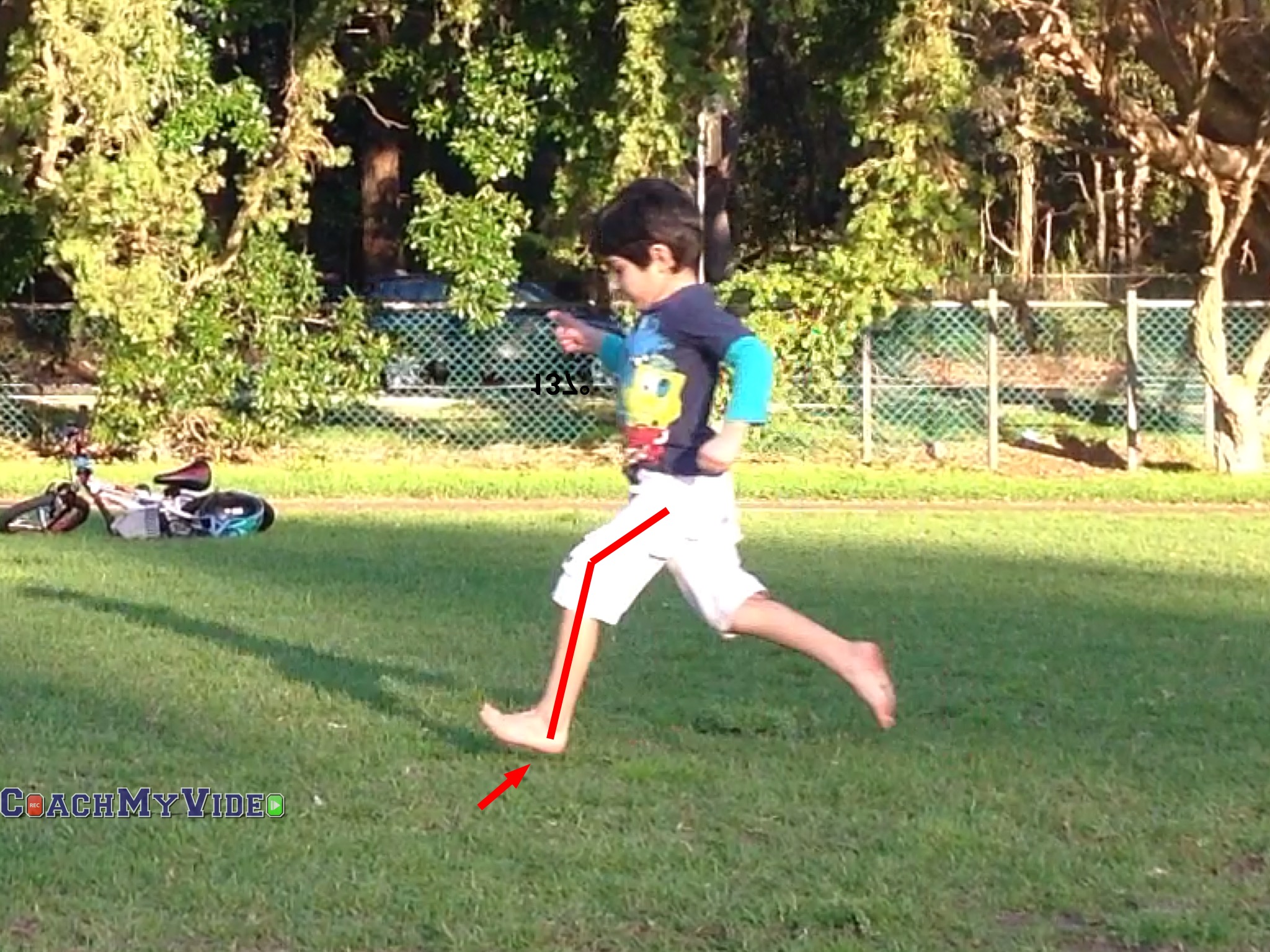 Cannot believe how easily we may deviate from the so-called natural front-foot landing technique, the outcome of human evolution in a few million years, over a short period of time running in cushioned shoes. Amazing how comfort leads us.

You must have heard of natural running but I have not come across any certain set of rules anywhere yet that clearly defines it. If there is any, it has to start with basics. If I try to write the basic rules down here I would start with these:

These two are natural features in our legs that play important roles at running. Note that half of the tendon elasticity (second item) is within the first item, the shock absorption, meaning our tendons stretch out as our muscles load at landing time to preserve a portion of the kinetic energy. This is done along with the rest of shock absorption mechanism to slow us down on the vertical direction. After the last moment of vertical stopping, the tendons unload to unleash the energy, like a stretched rubber band that returns energy once released . This is a big saving that helps us getting off the ground for the next stride with less muscular effort.

The shock absorption feature is simply in the curvy bendy shape of our legs broken down with joints. Three major joints exist between torso and the contact point with the ground: hips, knees, and ankles. Tendons around these joints provide some room to smooth the impact of touching down, as well as the other soft tissues inserted inside and around the joints. The more number of joints engaged at landing, the better the landing shock is handled. That simply means landing on the front foot would engage ankles whereas heel-striking would by-pass it relying on shoes to absorb the shock, not to mention leaving knees and hips with more pressure to deal with.

Now do you see how shoes and legs differ in terms of absorbing the landing impact? The answer is the one done by shoes would send kinetic energy to waste whereas legs can release back a portion of it due to their elasticity. My honest advice, improve this elasticity and it pays back the initial training by saving a lot of energy as you go.

I would call a running form unnatural if the technique in it, no matter how or why or caused by what, prevents utilization of any of these two features, and call it natural if not only it uses these features but also it enhances them and make the running economy be relied upon them more.

If you are up to choosing proper minimalist running shoes consider these four specifications:

To name a few minimalist brands:

Just started reading this book The Story of the Human Body: Evolution, Health, and Disease and it is already fascinating. Giving me insights into how we evolved and where we are heading to. Should write about it once I finish the book.